What's Popping Up in Your Pastures? 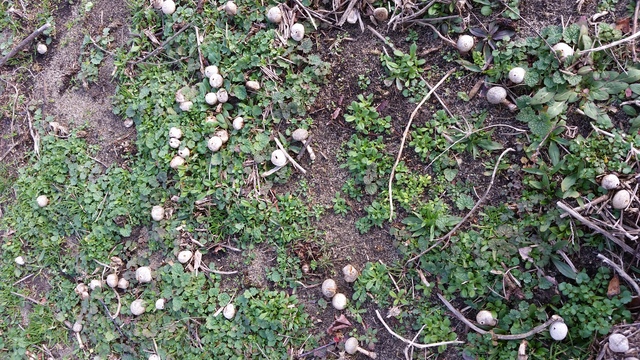 There are so many common poisonous or noxious plants, trees and berries in our region that we have to watch out for around our alpacas. We hear of these over and over: wild cherry, buttercups, red oak, azalea, rhododendron, hemlock, the list goes on and on. But what about the more unusual health threats that can pop up in your pastures? In this article, I will describe a few dangerous plants found in the mid-atlantic region that may be overlooked for their rarity, or toxic and negative effects on livestock.
Mushrooms
If someone had told us back in December that we would lose one of our top cria to ingestion of poisonous mushrooms, I’d laugh and think they were crazy. But it’s true. “The Little Mr” was a robust healthy 3 month old cria that went from running around with his buddies to dead in two days. We noticed one night that he didn’t go into the cria creep feed area for dinner, but didn’t really think too much of it. The next evening when we returned home from work, he seemed a little uncomfortable rolling around, but had urine and fecal output. We gave him fluids and decided that I would take off first thing the following morning and run him to our emergency vet clinic to have our internist evaluate him. Unfortunately, we found him dead in his stall that morning. Devastated and worried for the other cria, we took him for necropsy which revealed that he had died from sever acute hepatopathy (liver failure) from eating poisonous mushrooms, as aflatoxins were isolated from the bile and his small intestines. Both the pathologist and toxicologist who performed the necropsy recommended that we walk our pastures and look for mushrooms, and specifically those of the family Amanita. Amanita mushrooms are amongst the most poisonous in the world, capable of killing even humans who ingest them. Quite honestly, we didn’t even know we had mushrooms in our pastures, and I’m not sure if we saw them we would think they were a death threat. And it was December, afterall. How could there be live mushrooms in December? As it turns out, we did have a patch of tiny mushrooms under some leaves in the far lower corner of our maternity ward-exactly where we often saw groups of cria lounging.
We discovered that there are quite a few Amanita species of mushrooms that flourish in our region and that even remain viable throughout a mild winter, like this past. They have ominous names like “death cap” and “destroying angel” and come in all shapes, colors and sizes. They can grow in sandy soil, wooded, or marshy low level areas. The more common Amanitas in our area are small, often less than an inch or two across, and are whitish to slightly yellowish in color. They start out as juveniles that live as tiny buttons in the shape of an egg along the ground surface. They are so small and low on the ground, that they are barely noticed, but can be as deadly as the adult forms. Because they form as small buttons, an Amanita is often mistaken for a “puffball”, an edible mushroom. The only way to differentiate between the two is to slice one open. If there are gills inside, then is likely an Amanita; if there are no gills, then it is likely a puffball.
So why are these mushrooms so deadly? Amanita mushrooms contain amatoxins, which are amongst the most lethal poisons found in nature. These toxins work by acutely shutting down the liver and kidneys, as was the case in our cria. Death from amatoxin poisoning often occurs within a couple of days of ingestion and the only symptoms are that the unfortunate victim appears “off” or feels a little sick. There is one antidote for amatoxin poisoning, and that is extract of milk thistle, however, the individual who ate the mushrooms is often dead before an accurate diagnosis can be made.
“Death Cap”, Amanita mushroom
The best way to remove mushrooms from your pastures is to simply roll up your sleeves and pull them up by hand. For a patch like we had, we pulled up as many as we could and then went over the area with a small toothed rake to make sure we removed all of the stems. I would suggest to walk your pastures routinely every month looking for mushrooms that pop up, and to be aggressive to remove them immediately.
Lady Slipper Orchids
Orchids are my most favorite flowering houseplants. There is nothing more beautiful than an orchid in full bloom; the color, fragrance, delicacy, detail. They truly can take your breath away. Most people may not know, however, that in our region, the regal Lady Slipper orchids grow wild outdoors.

Lady Slipper orchids are in the genus Cypripedium and family Orchidacaea. The word “Cypripedium” is derived from the Greek, and literally means sandal. The beautiful pale pink flower of this orchid forms a delicate pouch that closely resembles a shoe, or slipper- hence its name. While they prefer to grow in sandy, well draining soil, Lady Slipper orchids can also be found in meadows and grassy fields in every state in the U.S. There are 9 varieties that grow natively in our region. So how did this rare beauty make this list of noxious pasture plants? They cause significant dermal irritation upon contact due to minute prickly hairs on the leaves. Additionally, if ingested, will cause oral and intestinal ulcerations similar to buttercups. I believe most livestock have learned the lesson to steer clear of buttercups while grazing, but orchids are so unusual that the flowers present an irresistible temptation to nibblers. The result can be irritating ulcerations on the lips, gums, tongue that will affect nursing in cases of cria, or eating in the case of adult alpacas. Treatment would be similar to buttercup ingestion, with supportive care.
What should you do if you find a wild orchid in your pasture? Wild orchids, particularly the Lady Slipper orchids, are protected by the US Forestry Service, therefore you should not dig them up. They are also extremely sensitive to relocation and often die when they are moved from their native location. Therefore, we recommend to secure a wire cage around it while it is blooming in early spring, and sit back and enjoy one of nature’s treasures.
Pokeweed
This weed is just a nuisance, plain and simple. It pops up everywhere, under any conditions and is nearly impossible to get rid of. American Pokeweed, or simply, Pokeweed, can grow up to 8 feet tall and bush out as much wide. It has thick woody branch-like stems that are laden with clusters of black/dark purple berries during the summer months in our region. While all parts of the plant are extremely toxic, the berries increase in toxicity as they ripen from purplish red to black. The toxins in this plant include phytolaccatoxin and phytolaccigenin. Animal and human ingestion and contact should be avoided at all costs. Not only does ingestion of the berries cause complications, but contact with the juice can be equally dangerous since it is absorbed readily through the skin. Consumption of Pokeweed poison in severe cases causes death through respiratory paralysis. A little known fact is that Pokeweed is known to be teratogenic, meaning it can cause birth defects and late term abortions in humans and animals. For this reason, pregnant women should not touch or handle Pokeweed and pregnant or nursing alpacas should not be permitted into any pasture where they are growing. Do not assume that they know not to eat the berries, and since the poison can absorb through the skin, the poison can be delivered internally through rubbing or simple contact.

Symptoms of Pokeweed poisoning include violent vomiting within 2 hrs of ingestion, salivation, gastrointestinal cramping, muscle spasms, convulsions, shortness of breath, gasping for air and complete respiratory paralysis. Any human or animals suspected of Pokeweed poisoning should be transported to a medical emergency center immediately.
The best way to try to control this noxious weed is to pull, dig or chop it up and haul it off your property to a landfill before it can reseed itself. It is very stiff and deep rooted, making it difficult to pull, but every effort must be made to completely remove them from your pastures.
There are many common and rare plants that can inhabit our alpaca grazing pastures, causing everything from mild irritation to aborted fetuses and even death. The best way to deal with these is through education and aggressive management year round. As illustrated in this article, poisonous plants can be found in our region during every season.

Kim Gleason has earned masters and doctoral degrees in Veterinary Pathology and Reproductive Physiology. While her main focus is helping infertile couples in human medicine, she actively engages in scientific research to improve current understanding and management in the alpaca industry. She and her husband own Dancing Horse Farm in southern New Jersey. Kim dedicates this article to “The Little Mr”, and hopes that the awareness of potential dangers can save other cria. 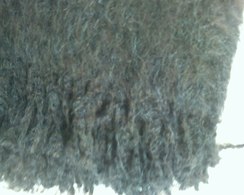 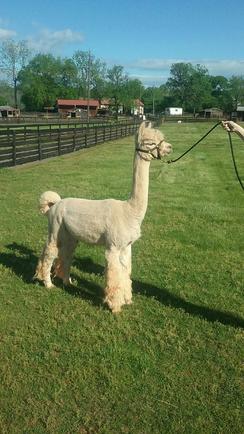 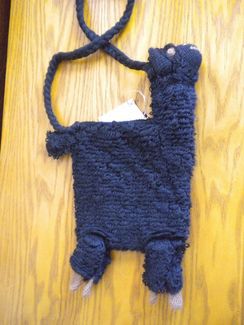 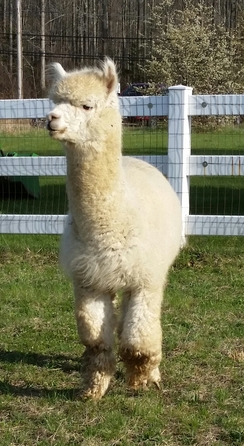